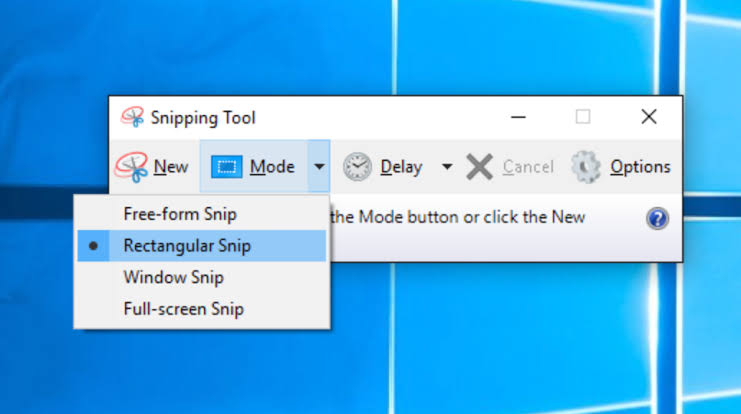 Capture all — or just part — of your screen with a few keystrokes.

Windows 10 October 2018 Update introduced a new way to take screenshots last year. Snipping Tool is out; Snip & Sketch is in. (Actually, the Snipping Tool is still kicking around, but Microsoft claims it is being phased out.)

Here’s how the Snip & Sketch tool works — and other shortcuts for taking screenshots with Windows 10.

The Snip & Sketch tool is easier to access and makes it easier to share screenshots, but it lacks an important feature that is keeping me on Team Snipping Tool. From the Snip & Sketch window, click the New button in the upper-left to initiate a screen capture.

The Snip & Sketch window disappears, and in its place you’ll see a tiny menu at the top of your screen that lets you choose which type of screenshot you want to take — rectangular, free-form or full-screen. Surprisingly, it does not offer any way to capture a screenshot of a window, which is my go-to with the Snipping Tool. You can also click the down-arrow button next to the New button in the Snip & Sketch window to delay a snip for 3 or 10 seconds.

After taking a screenshot, it gets loaded to Snip & Sketch, where you can annotate it with the pencil, pen and other tools at the top of the window. Your screenshot is also copied to your clipboard, and it includes any annotations you make.

The Snipping Tool has been around since Windows Vista. Click the New button to begin the screenshot process. The default snip type is a rectangular snip, but you can also take free-form and full-screen snips along with a window snip.

The Snipping Tool does not automatically save your screenshots — you will need to manually save them in the tool before you exit — and it does automatically copy your captures to the clipboard.

To capture your entire screen, tap the Print Screen (sometimes labeled PrtScn) key. Your screenshot will not be saved as a file, but it will be copied to the clipboard. You’ll need to open an image editing tool (such as Microsoft Paint), paste the screenshot in the editor and save the file from there.

To capture your entire screen and automatically save the screenshot, tap the Windows key + Print Screen key. Your screen will briefly go dim to indicate that you’ve just taken a screenshot, and the screenshot will be saved to the Pictures > Screenshots folder.

You can also use keyboard shortcut Windows key + shift-S (or the new Screen snip button in the Action Center) to capture a screenshot with Snip & Sketch. Your screen will dim and you’ll see Snip & Sketch’s small menu at the top of your screen that will let you choose with type of screenshot you want to capture.

To take a quick screenshot of the active window, use the keyboard shortcut Alt + PrtScn. This will snap your currently active window and copy the screenshot to the clipboard. You’ll need to open the shot in an image editor to save it.

If you’re rocking a Microsoft Surface device, you can use the physical (well, sort of physical) buttons to take a screenshot of your entire screen — similar to how you would take a screenshot on any other phone or tablet. To do this, hold down the Windows Logo touch button at the bottom of your Surface screen and hit the physical volume-down button on the side of the tablet. The screen will dim briefly and the screenshot will be automatically saved to the Pictures > Screenshots folder.