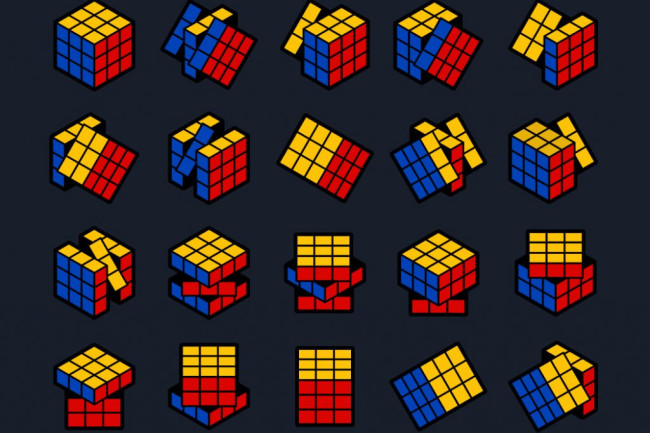 How to Solve a Rubik’s Cube, Step by Step

Earlier this year, while putting together a video about the world’s fastest solvers of the Rubik’s Cube, I decided to devote some time to learning to solve the classic puzzle myself. Tyson Mao, a cofounder of the World Cube Association, came to WIRED’s offices and spent about an hour teaching me his go-to beginner’s method. Afterwards he told me that, with practice, I could probably get my average solve time down to under a minute and a half. Ninety seconds is not fast by speedcubing standards (the world’s fastest cubers average well below 10 seconds per solve), but Mao said it would be a respectable time for a dabbler such as myself.

I began practicing the next day. My first time solving the cube on my own took me more than 20 minutes. Brutal. But I kept at it: For two weeks I spent at least 20 minutes a day scrambling my cube and solving it the way Mao had taught me. First I memorized a handful of algorithms (cuber lingo for defined sequences of moves known to advance a cube closer to its solved state). Then I practiced performing them faster and more precisely.

By day three I was solving the cube in under four minutes. I broke the two-minute barrier a couple days later, on a cross-country flight to Florida. (Planes are an ideal place to practice cubing.) The improvements came more slowly after that, but within a fortnight I’d lowered my average solve time to a little under 60 seconds.

In the time since we published the video about speedcubing, several viewers requested that WIRED create another video demonstrating the method I used when learning to solve the cube. So we made one! Above you’ll find a visual guide in which I walk you through the same solving method that Mao taught me. Below is a written tutorial that summarizes the points in the video, including the eight steps you’ll follow to solve the cube, an overview of cube notation, and descriptions of the algorithms you’ll need to memorize.

The tutorial below was originally created by Mao, so all credit goes to him. I’ve merely tweaked it for the sake of clarity.

One last thing: While the tutorial can function as a stand-alone document, it’s really intended as a supplement to the video. In time, you might come to rely solely on the written instructions, but don’t be discouraged if you find yourself referencing the video for help—especially when you’re starting out.

Here are some things you should know about the Rubik’s Cube. Some of these points might strike you as trivial at first, but each affords some insight that will become clearer the more time you spend with the cube.

Solving the cube will require you to turn its faces. Each face is represented by a letter. The direction of a given rotation is denoted by the presence or absence of a prime (’) symbol.

R, L, U, D, F, or B means to turn the corresponding face 90 degrees clockwise

Step One: Make the Daisy

The goal of this step is to place four white edge stickers around the yellow center. When you are finished with this step, the top of your cube should look like this:

Note: It doesn’t matter what color the grey squares are. Two things to keep in mind:

For each petal on the “daisy,” match the non-white sticker to the center piece of the same color. Once matched, turn the face with the matching center two times. Repeat this process three more times. When you are finished, the bottom face of the cube will have a white cross.

Time to learn your first algorithms. The following “trigger moves” are the most basic of the bunch:

If you have a white sticker facing the top, position the white sticker over something that is not white (because it will disrupt whatever is underneath), and, depending on if the piece is on the right or on the left, perform the following algorithm:

If you have an outward facing white sticker in the bottom layer, face it toward you and position the cube so that it is either in the bottom left or bottom right corner of the side facing you, and perform either the left or right trigger, respectively, to relocate it to the top face of the cube.

Once it matches, look at the upward-facing sticker on that edge piece. That sticker will match the center on either the left or the right.

If it matches on the right, perform the following algorithm:

Doing so will disturb the first layer. Fix the displaced white corner sticker as you did in step three.

If it matches on the left, perform the following algorithm:

Doing so will disturb the first layer. Fix the displaced white corner sticker as you did in step three.

The goal of this step is to create a yellow cross on the upward-pointing face of the cube. This entire step hinges on the following algorithm:

Step Six: Solve the Yellow Face
The goal of this step is to completely solve the top face of your cube. When you’re finished, that face should be entirely yellow. For this step, you will use the following algorithm:

Begin by inspecting the top face of your cube. How many corners have yellow stickers on top?

If you have zero or two, hold the cube so a yellow sticker is in the upper right hand corner of the face in your left hand, i.e. here:

If you have one corner with yellow on top, it will look like there’s a fish on the top face of your cube. Rotate that face until the fish is pointing down and to the left, like so:

You might have to orient the fish and perform the algorithm one last time. Once you have, the yellow face will be entirely solved.

Step Seven: Position the Corners of the Cube

Time for a new algorithm:

The above algorithm swaps corners A and B. Note that the eighth step of the algorithm undoes the seventh. That’s intentional, because it will make memorizing the algorithm easier: Notice that R U R’ U R U2 R’ is the same algorithm you used in step six.

Use this new algorithm to position all four corners in the correct place. If you have to switch two corners diagonally, perform the algorithm once, then reposition and perform it a second time.

If one face’s edge pieces are already correctly positioned, orient that face away from you and perform whichever algorithm will cycle the remaining edge pieces in the appropriate direction.

If all four edge pieces are misplaced, perform the counterclockwise algorithm once, position the side with the solved corners away from you, and perform it a second time.