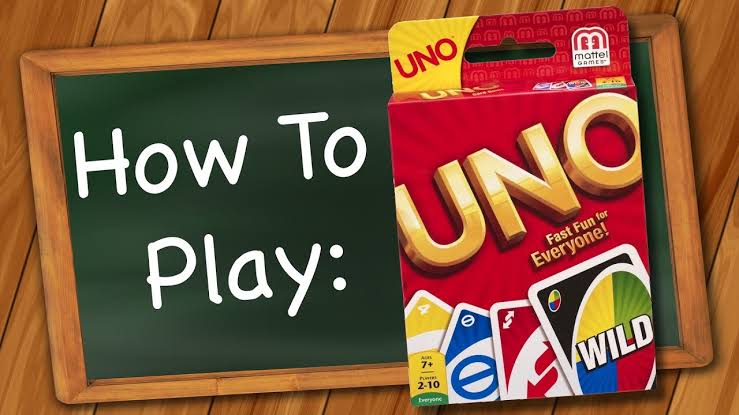 The rules to UNO are simple once you get used to them. We’ve also included a few common house rules to spice up the game.

UNO is a fast-paced card game played similar to Crazy 8s that includes special cards that ramp up the fun. Just like another game by the makers of UNO called Phase 10, UNO is suggested for ages 7 and above, but younger kids can still enjoy the game. It can even be a good game to reinforce numbers and colors.

The goal of UNO is to be the first person to play the very last card in your hand. The fun of UNO is the requirement to yell “UNO!” when you are down to that last card. When playing multiple games, the winner is the player with the lowest score.

How to Set up the Game

After the dealer is chosen, each player is dealt seven cards. The remaining cards are placed face-down. These cards are called the “draw pile.” The dealer takes the first card on the draw pile and places it face-up next to the draw pile. If this card is a Wild or Wild Draw 4 card, that card is placed in the middle of the draw pile, and a new card is drawn.

The player on the dealer’s left is the first person to play unless the initial card flipped over is a Reverse card. The Reverse is considered active even if a player did not play it, so it would be the person to the right of the dealer.

A common house rule is to alternate dealers when playing multiple hands of UNO, moving the dealer to the person on the left in a clockwise direction from the last dealer. When playing with younger children, an alternative to drawing for the highest card is to allow the youngest child to be the initial dealer.

The gameplay of UNO consists of each player taking turns that consist of either matching the upmost face-up card in the stack or playing one of the special cards.

If the last card is taken from the draw pile, all of the cards that have been played except the topmost face-up card should be shuffled and used as a new draw pile. This can continue as many times as it may take for someone to finally run out of cards in their hand.

The fun of UNO is all of the special cards that can change the game in a heartbeat. These cards add a certain amount of strategy to a game that would otherwise be the luck of the draw. In some decks, these cards are only marked with a symbol. Other decks also spell out the special card’s name.

A player is required to say “UNO” before playing their second-to-last card. If a player only has one card in their hand and another player says “UNO” before the next player begins their turn, the player must draw four new cards from the draw pile.

If the next player begins their turn, and no one says “UNO,” play will continue as if the original player did say “UNO.” They are not forced to draw any new cards for not saying “UNO.” A player is considered to have taken their turn when they either match the face-up card with a card from their deck, play a wild card, or choose a card from the draw pile. Once they begin drawing from the draw pile, players cannot call “UNO.”

Calling “UNO” does not win the game. The player must still play their last card. If they are unable to play the last card, they must take cards from the draw pile until they can play. It’s possible to have several UNOs before the game is won.

If the winning card is a Draw 2 or Wild Draw 4 card, the next player must still draw those cards before the game ends. These cards are used in scoring.

The official rules state that matches are won when the first person makes it to 500 points. The winner is the person with the least number of points at that time. House rules can change the number of points needed to end the match from 500 to any other number.

At the end of each game, all of the cards are tallied up, and the score for that game is written down and totaled to determine if any player passed the 500 point mark.

A common house rule for scoring and determining the overall winner is to eliminate the player(s) whose point total reaches 500 or more, but continue playing until all but one players have been eliminated this way.

For more family card fun, War, Snap, Beggar My Neighbor and Memory can all be played with a standard deck of cards and are suitable for children.