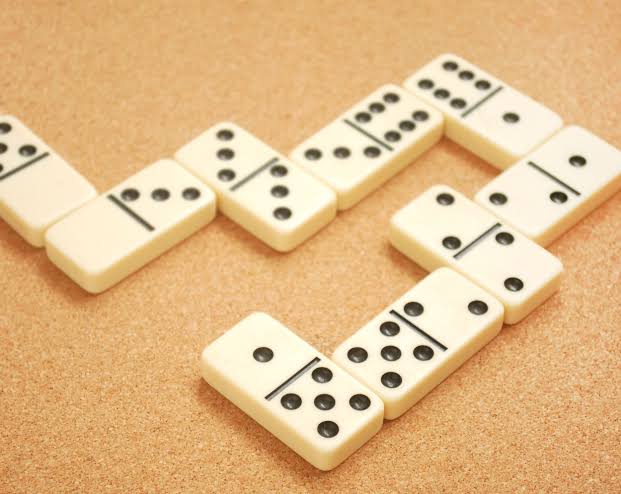 The dominoes are ritually shuffled face down in circles with the flat of the hand – producing a sound that has been familiar down the centuries. Each player draws 6 dominoes and places them so that the other players can’t see their value. The traditional English pub method of doing this is face down in two rows of three so that all six can be picked up with both hands, looked at and returned leaving the other hand free for the equally important business of drinking a pint. Beginners can just place them on their edge in a row facing them. Remaining dominoes are termed “sleeping” tiles.

The first person to play is that person holding the double-six, or failing that the double-five and so on. The tile played must be the double tile that permitted the player to take the first turn. If none of the players hold a double, then the tiles are reshuffled and re-drawn.

Each player must in turn then play a tile onto the table positioning it so that it touches either end of the domino chain which thus gradually increases in length. A player may only play a tile which has upon it a number showing at one end of the domino chain or the other. If a player plays a domino with the result that both ends of the chain show the same number (normally a number which is useful to the player and distasteful to the opponents), that player is said to have “stitched up” the ends.

The way that the tiles are placed provides a small part of the entertainment. Each tile being placed must be positioned so that the two matching ends are adjacent. Unless, the tile is a double, the tile can be placed square in any one of the three directions as long as the two matching sides are touching fully. Doubles are always placed cross-ways across the end of the chain. A tile played to a double must also be placed accordingly – perpendicular to the double touching at its middle. The shape of the domino chain develops snake-line at random according to the whims of the players and the limitations of the playing surface.

If a player can lay a domino, then it must be played. Otherwise the player “knocks”, or raps the table and play passes to the next player. The opposing players will, of course, make mental note of the numbers currently available on the table and try to ensure that they are available in future too…..

Normally play stops when one player “chips out” (plays his last domino) although some versions require both partners to chip out. If it reaches a point at which no player can proceed, the winners are the partners whose combined sum of all spots on their remaining dominoes is the least.

For scoring, some pubs would play a point per game. A more interesting method, that might be scored using a cribbage board, has the winners score the sum of all spots on the losers remaining tiles. In a game which doesn’t result in anyone chipping out, the winners would receive the difference between the winners total spots and the losers total spots. A game can be played to 100 points, say, or on a cribbage board, 121 points.