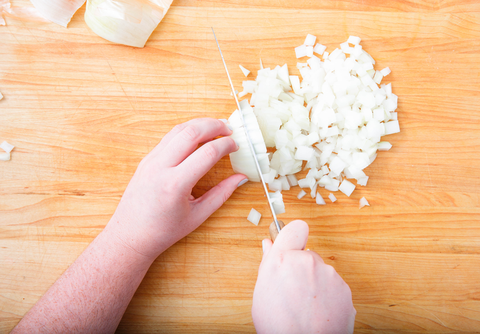 How To Cut An Onion

Onions are inescapable. They’re part of the holy flavor trinity, mirepoix. If there is anything worth mastering, it’s how to cut an onion. It will speed up your prep, leaving you plenty of time to make Bacon Jam and trust me, you want to make bacon jam. After a few practice rounds I have no doubt you’ll have this mastered.

Using a sharp knife, trim off both ends of onion, leaving the root still intact.

With the root end facing up, cut the onion in half through the root.

Peel off skin from both halves and discard the skin.

Lay one half cut side down with the non-root end facing you. Make cuts vertically through the onion, being careful to not cut through the root.

Turn your onion so that the root end is now on the left and the non-root end is on the right (assuming you’re right handed—if you’re left handed this will be reverse). With your knife parallel to the onion, make three cuts horizontally through the onion, one toward the bottom, then one in the middle, and the last one toward the top, still being careful to not cut through the root.

Now, chop your onion with cuts running perpendicular to your first vertical cuts.

You should have perfect square pieces of onions! Now get cooking.