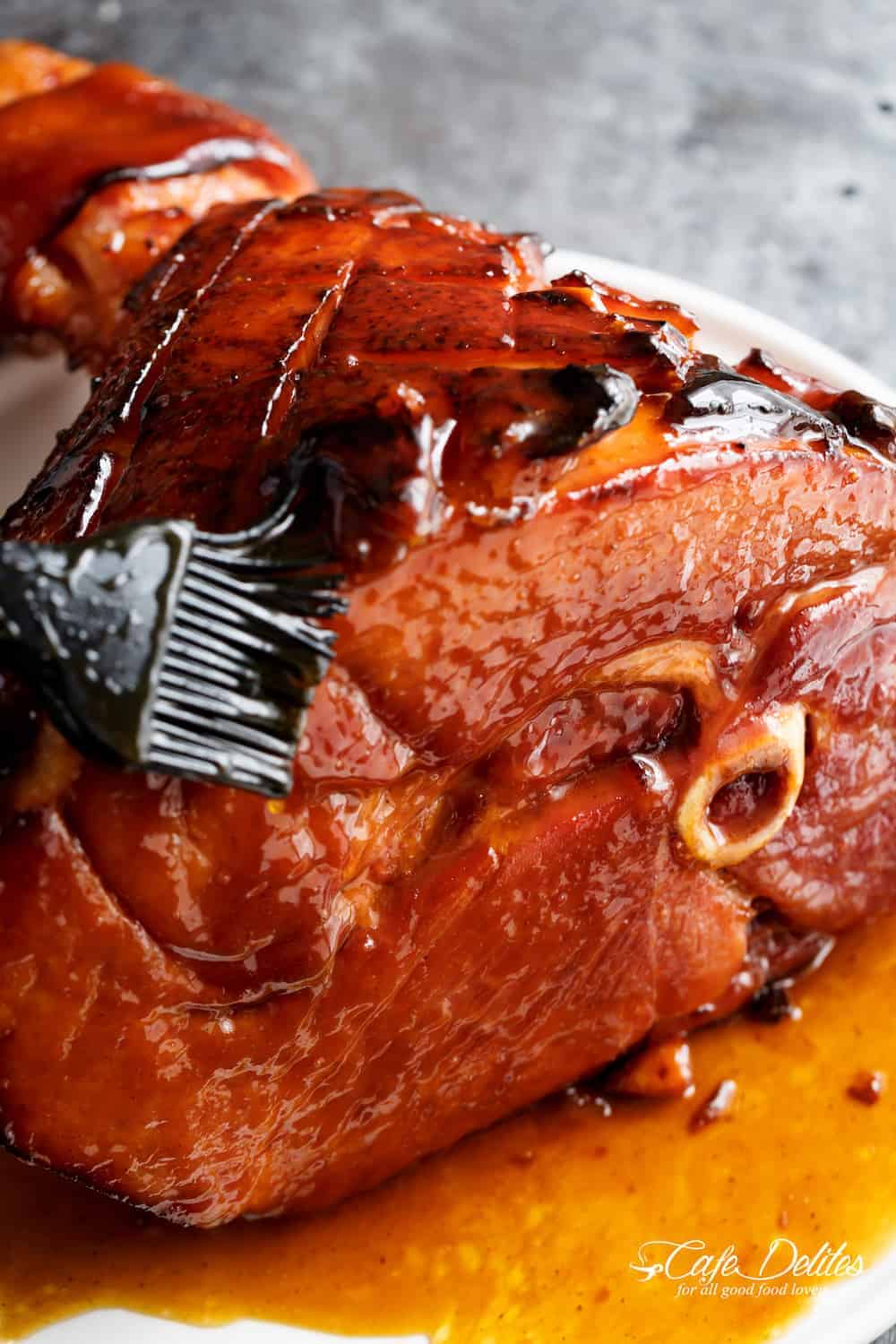 Brown Sugar Mustard Glazed Ham is the perfect juicy centrepiece for your Christmas dinner table! You will love this GLAZE!

The most perfect sticky glaze is slathered all over this juicy, tender, baked Brown Sugar Mustard Glazed Ham, with crisp edges and an incredible flavour.

Don’t even be intimidated by a ham this season with all of the tips and tricks you need right here!

More often than not, most times we as a people try baking a ham for Christmas, they end up dried out on the inside without any flavour and a cause for major anxiety before guests arrive. This would have to be the WORST kind of ham.

Take out all the guess work out and find out how to bake a juicy ham with charred crispy edges and a beautiful sticky glaze… right here!

The best glaze for a baked ham contain either honey, brown sugar or maple syrup. The saltiness from the ham and the sweetness for the glaze complement each other so well, that either of those ingredients make for a pretty special glaze.

The glaze I went for is a combination of butter, brown sugar, honey, Dijon mustard (adding a nice tang to the ham) and crushed garlic cloves.

From here you can add in spices like the traditional ground cinnamon and ground cloves, or leave them out. Most recipes call for decorating the ham with whole cloves between each cut. Personally, I didn’t appreciate chewing on the cloves that were wedged in and hidden from sight. However, you can add them if you wish!

HOW TO COOK A HAM

You only need 3 steps to make the perfect, heavenly ham recipe!

WHAT IS THE BEST HAM TO BUY?

For ultimate flavour and a juicy result, aim for a fully cooked bone-in ham. The best ham we baked during testing is the half leg pictured (shank end of the leg).

The other type of ‘half leg’ which is the butt end (shaped like a dome) contains part of the hip bone and is harder to carve. It has less meat, although it’s very tender and flavourful.

If you want value for your money, go for the type I have pictured here.

Spiral cut hams seem to be gaining in popularity over in the United States, but unfortunately I can’t comment on them since we don’t have them.

TAKE THE RIND ON OR OFF?

For some reason, this is the most controversial step — taking the rind off. In testing with the rind still on, I found the rind became chewy and gummy as the ham cooled and tough to eat.

Also, the flavours of the glaze stopped at the rind with no flavours seeping into the fleshy part of the ham.

For this reason, I suggest trimming the rind off. Fully cooked ham rind DOES NOT crisp. We tried broiling, baking at high heat and deep frying.

HOW TO REMOVE HAM RIND

When you buy your ham, you’ll notice right underneath the rind there is a gorgeous layer off fat. DON’T trim this away. This fat turns into a beautiful crispy and sticky coating for your glaze and is DIVINE.

To show you, I’ve put together the following EASY steps OR CHECK OUT THE VIDEO BELOW:

Once your ham is in the oven, get started on your glaze.

TIPS FOR THE BEST HAM GLAZE

My biggest piece of advice is not to simmer the glaze for too long, as you will end up with a hard caramel once it begins to cool, and it’s extremely difficult to slather onto the outside of the ham when glazing. You want to bring it to a gentle simmer and take it off the heat quickly.

I added the pan juices from the ham into the glaze once there were pan juices to use, and WOW! Amazing flavours! My ham wasn’t salty though, so make sure you do some taste testing before adding the juices and add the amount you need to alter the flavour even more.

I wish there was smell-ernet happening right about now, because juicy, tender Brown Sugar Mustard Glazed Ham smells just as good as it looks.

The BEST part is slicing through it like butter, and seeing the juices burst out and run down behind each slice. NO DRY HAM OVER HERE!

What side dishes go with ham?

Whether you’re making this for dinner yourself or bringing it to a Holiday gathering, these side dishes will make your crowd even happier!