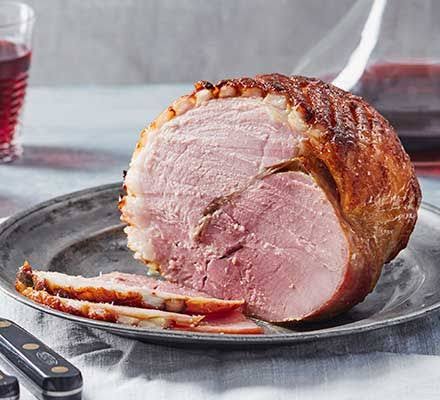 How do you feed a crowd at Christmas? I think I’ve got it nailed. With 18 people coming for Boxing Day lunch this year (how did I let that happen?!) it will be a simple meal, a reprise of a successful Christmas Eve dinner from a few years back: a whole, hot ham glazed in the oven.

Then, we ate it with boiled potatoes, and a parsley liquor – a sort of thin sauce-meets-soup – and green crinkly shreds of buttered cabbage. It was the right food at the right time, eaten out of deep soup plates and followed by mince pies, cream and clementines.

There were lots of leftovers for sandwiches, salads and soup: cold ham is a much more useful thing to find in the fridge than turkey.

This year I’ll be doing it in red wine and fennel, or maybe a fiery ginger version. That’s the great thing about a ham. There are lots of options: just flavour the broth with some herbs, spices, booze or all three, and add the side dishes and relishes.

Bring out all the jars of chutney and pile them into bowls. Stack up the plates, and get stuck in.

Allow 300g per person for ham on the bone, 200g per person off the bone. It’s worth ordering a ham online (see stockists below), as the supermarkets only have small joints.

Bone in or boneless?

The most delicious, juiciest meat is cooked on the bone, and after all the ham is finished you can use the bone to make a fantastic broth. Bone-in joints are generally huge, whole legs weighing 6kg or more, although a few suppliers will sell a half leg. Boned hams, meanwhile, come in whatever size suits you, are easier to carve, and still taste great.

To soak or not to soak

These days, it’s generally not necessary to soak gammon (uncooked ham) to make it less salty before cooking. That said, some will benefit from a soak in cold water overnight (ideally not longer than that: you don’t want to remove all the trademark salinity), especially if you plan to bake the ham outright rather than simmering it in broth first (see ‘how to cook’, below).

The producer’s instructions should say if they expect you to soak, but the only way to be sure is to slice off a sliver and cook it quickly in a frying pan. This will probably make the slice a bit tough and dry, but it lets you taste and judge. Bear in mind that the edge may be a bit saltier than the middle.

HOW TO COOK A CHRISTMAS HAM

‘Bored of diamonds? Use a small metal biscuit cutter – a circle or star – to stamp the fat instead’ Credit: Haarala Hamilton

You can bake the ham outright in the oven (170C/150C fan/Gas 3 for 22 minutes per 500g), but simmering it in a broth first (as I recommend in the recipes below) lends extra flavour and results in a hammy liquid that is great for soups and stews. Weigh the ham before you start.

Water will do fine for simmering the ham, but adding extra flavourings gives oomph to your meat and broth. The exact quantity of liquid – which should cover the ham generously – depends on the size and shape of the ham and pot. Choose one that fits your ham the most snugly.

Depth is often an issue so improvise – if you have an asparagus steamer getting dusty in the back of the cupboard (I know, most of us don’t), it’s ideal for small boneless joints. If you need more liquid to cover the ham, either double the quantities or add water to make it up. Or tent tin foil over the ham, sealing it around the edge of the pan, and turn the ham half way through the cooking.

Once the ham is just cool enough to handle, peel off the skin, leaving a layer of fat on the meat. Score this in a criss-cross with a sharp knife, to help the glaze stick and caramelise, and also to look pretty. You can stud a clove in the middle of each diamond if you like. Bored of diamonds? Use a small metal biscuit cutter – a circle or star – to stamp the fat instead.

A syrupy glaze makes for a burnished, caramelised finish to the ham fat: plain honey, maple syrup or even golden syrup or jam are all good quick fixes. But pungent spice is a good addition – mustard or ginger say. Vinegar or fruit juice lends acidity, especially if you add sugar for extra caramelisation.

Pork, fennel and red wine are a classic combination, and this purple-stained ham is a great centrepiece. I prefer to use a cheap cabernet sauvignon or syrah-based wine, as I’ve found merlot gives a duller, less appetising colour. Serve with lentils cooked in the broth, braised chicory and some green leaf salad – watercress is ideal.

This is a British take on ham in Coca-Cola, with a really spicy kick from the ginger. Don’t use a ginger beer with artificial sweeteners in – I used Fentimans, which has a little less sugar than some of the others.

Roast sweet potatoes, plus a salad of bitter leaves

I like to eat this sweet, feisty soup with some bread and Stilton alongside – or even a little of the blue cheese sprinkled on top. A few whole coriander seeds, heated in a dry pan until fragrant, is another good topping.

Enough for four as a starter or two lunches

RECIPE 4: Ham in perry or cider

Perry or cider gives a lovely mellow sweetness to ham. The broth works well as a base for Boston baked beans.

enough for six to eight people