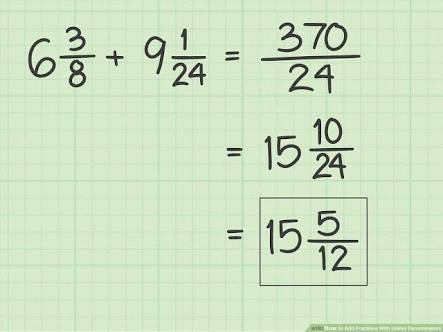 Today, we’re going to walk through some examples of adding fractions.

Let’s begin with the simplest of examples:

Adding Fractions with the Same Denominator

The only thing we need to do is add the numerators and leave the denominator alone. The answer is:

Adding Numbers and a Fraction

The first thing that we need to do in this case is to convert the 2 into a fraction. As you already know, we can simply put a 1 in the denominator of any number without changing its value:

When we have two fractions, we can start looking for the common denominator. In this example, it’s quite simple because the least common multiple of 1 and any number is that number. So:

…and now we put it into our addition problem:

Remember that two numbers are co-prime if their greatest common divisor is 1. For example, in the problem:

The denominators are co-prime because:

These kinds of problems are simple to solve because the only thing that we need to do to find the new numerators is to multiply each numerator by the denominator of the other fraction, as shown below:

And we simply multiply the denominators together. So, we get:

And the only thing that’s left to do is to add the two fractions together:

We need to calculate the least common multiple of the denominators:

What do we have to do next? Let’s break it down. First, let’s look at the fraction:

To find the numerator, we need to divide the LCM by the fraction’s denominator:

We need to multiply the fraction’s numerator by 2. So:

And we can see that the new numerator is 6.

For the denominator, we just need to use the GCM (18):

Now, we just do the same thing with the other fraction. To solve for the numerator, we need to divide:

And multiply by the numerator:

Then, we put in the GCM as the denominator, which gives us:

Now, all that’s left to do is to add the fractions together …

We actually add all fractions this way, the first examples were simpler thanks to the GCM that was easier to work with. The way of solving the problems, however, always stayed the same.

To summarize, the steps for adding fractions are:

Good luck adding fractions—with a little practice, you’ll see that they’re a snap and you’ll get it in no time!