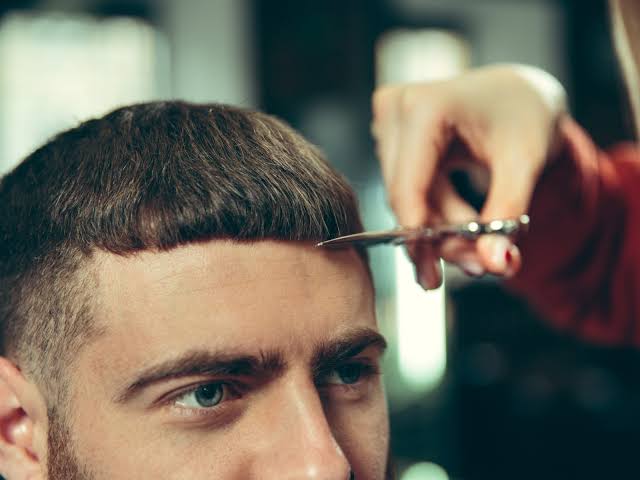 Cutting your own hair is no easy feat (we’ve got the step-by-step haircut guide to prove it). But for men, in particular, it’s even trickier: Men tend to wear their hair in shorter styles, requiring a much closer eye and more precision than simply snipping off frayed ends. However, it is possible to turn your barbershop DIY. No need to resort to the quickly trending “bro flow” during quarantine (unless that’s your jam, then by all means, flow away). Here are some quick tips on what you need to know about trimming men’s hair.

Here’s the truth about cutting men’s hair: Doing it yourself is difficult.

Stylists agree that men’s hair is much harder to trim, especially on their own. A shorter style leaves little-to-no room for error, says celebrity hair colorist Rita Hazan, with one foul snip running the risk of an uneven fade. Celebrity hairstylist and Biolage brand ambassador Sunnie Brook similarly notes: “It’s a more difficult cut to achieve on yourself because you are really limited on the angles you can get when cutting the hair above the shoulders.”

1. Enlist help—if you’re quarantined with others.

You might want to convince your partner or family member to be your impromptu stylist for the day. They’ll have a better angle to shear certain areas from a top-down view. It might not be a totally DIY project (emphasis on “yourself”), but you’ll likely fare better this way.

2. Come up with a game plan prior to starting.

For men, “it’s all about the desired end result,” says Brook. A classic crewcut may require a completely different plan of action than a textured pompadour or low fade look—compared to trimming the ends off long hair, which more or less has the same technique (again, we refer to our DIY haircutting tutorial linked above). So approach the task with that certain end goal in mind. And unless you have ample experience with this, we recommend the simpler, the better.

While you’re creating your game plan, map out the various hair lengths. On the most basic level: The top of the head should be longer than the sides, so secure the top with clips so it’s out of the way. “This is usually from the temples to just past the round of the top of the head,” says Brook.

3. Ditch the scissors, and grab some clippers.

Most men tend to wear their hair in a short, layered, or clipper cut, so scissors might not be the best go-to tool. Grab some clippers instead—and ask your hairdresser what “guard length” they usually do on the sides (they’ll typically give you a number or simply describe what the hair should look like when cut). As hairstylist Clay Nielsen assures: “Trust me, they would love to hear from you.” Just be sure to compensate them for their time.

While most men wear their hair in a short, layered, or clipper cut, each style has its nuances (and those are by no means the only three cuts available to men); feel free to search for some how-to videos of a similar hairstyle before getting started. You might feel more at ease than if you started winging it with clippers.

And when you actually go about trimming, start at the front by the temples moving your way toward the back. Then repeat at the other side. The last tip to know when using clippers: the wrist flick. At the end of each stroke of the clipper, flick your wrist up and out. This will create a more gentle fade.

4. You can trim the top front with scissors.

Since these tend to be the longest pieces, you can trim the hairline with scissors if the length warrants it. Just hold the hair tightly between your fingers and position the shears at an angle—so they are not quite perpendicular, nor horizontal. This will give a more natural, textured look, as well as provide a bit more room for error than a straight line would.

“Better to leave it a little longer and go back and make it shorter than just cutting a big chunk out,” says Hazan. Remember: You can always go shorter, but salvaging a rough chop is a difficult feat, to say the least.